I got my first Birchbox in the mail July 24th.  The actual box size was smaller than I expected but still a good bargain for only $10/month.

In this month's box I received -

The packaging was a little spray bottle.  I've used it pretty generously twice and there's plenty left.  At least 2 or 3 more times.  There's a "salon" scent when spraying but it seems to fade pretty quick or at least isn't overwhelming.  I can still smell the scent of my shampoo and conditioner.  With each use my hair feels very soft and styles very well.  It's $32 for 200ml but depending on how long the sample size lasts it may be worth the splurge.

The packaging was a little squeeze tube.  A little goes a long way so the tube itself will probably last as long as 2 weeks.  The color works well with my skin tone and the product seems to control shine pretty well.  I can't tell how well it fixes my skin because a) it was looking pretty good before I started using this and b) I've only used it twice.  The fragrance is very strong when applying and kind of a heavy pine-y scent.  Luckily it fades almost instantly or it would be unwearable.  It's $39 for 1.7oz which would probably last quite awhile.  I'll have to go back to my old drugstore BB cream before I can tell if this is worth the purchase.

The packaging is 2 sizable foil packets.  I could easily get 2 uses out of each package.  The packet opens easily without sending product everywhere.  This is a good self tanning lotion and the color is very natural.  At $18 for 8oz the price is a little steep but not impossibly so.  I probably won't buy this because I just don't use self-tanning lotion.

The packaging was a really cute glass bottle that is a miniature of what you would get the full size product in.  It does seem to even and brighten my complexion a bit.  It does have a fragrance but it's nice and clean and isn't too overwhelming when the lotion is on.  It is $28 for 1.7oz which is steep but also not unreasonable for a high quality moisturizer.  It's a toss up between this and the Prep & Protect spray for what I would buy from this box.

I got these in white and love the pattern on them.  I normally don't use bobby pins but these are thick and heavy duty enough that I might attempt them.  They're more the width of a barrette than a bobby pin so more of an accessory than a tool.  It's $5 for a set of 6 so if I do end up using them I'll definitely buy a set.

All in all 5 good size products - 2 I really like, 2 I do like but probably won't buy and 1 that I normally don't use but am now interested in trying.  I'd only heard of 1 of these brands before (Benefit) so it was fun discovering new brands.  I love that you get 10 points per review for reviewing the products you received.  For every 100 points you get a $10 credit.  So 10 points for buying the box, and then 50 points for reviews makes it a incentive program that you actually get something out of.
Posted by Katherine P at 11:08 AM 1 comment:

I was excited to try this recipe for the Cream Cheese Cookie Dough Frosting.  I love cookie dough, I love cream cheese frosting - what could go wrong?  Add that to the fact that is supposedly a copy-cat recipe from a Sweet Tooth Fairy Cupcakes and I was really excited.  I've seen her on Cupcake Wars at least twice and her product always looks amazing.  Also, I made a copycat white chocolate frosting from her last year and it was amazing.  I really dislike white chocolate - usually if a recipe calls for white chocolate chips that's either an automatic no or at best a substitution.  That being said I still dream about that frosting. 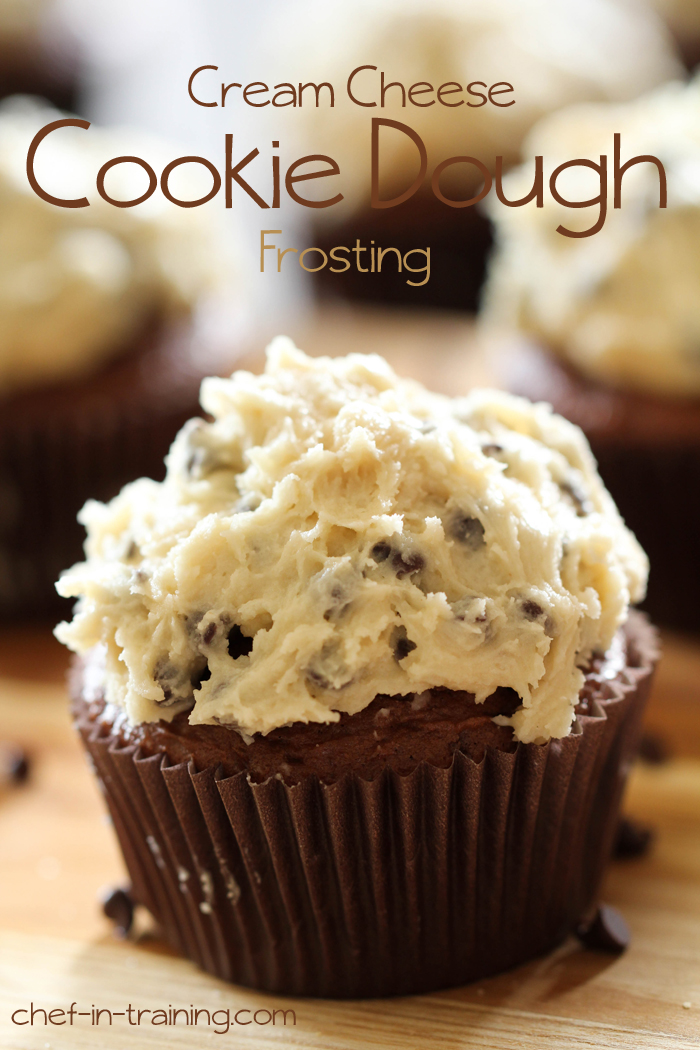 1. Source:  Chef-in-Training - one of my favorite and most reliable food blogs.

2. Ease of Recipe (1 being cake mix/canned icing - 5 tons of steps and very time consuming):  This recipe was really just for the frosting but I did a chocolate cake from a cake mix that was doctored.  All and all it gets a 2.  The frosting takes some softening of ingredients and a pretty good bit of mixing.

3. Changes Made: None to the frosting.  To the plain devil's food cake mix I replaced the water with milk with a dash of cream and maybe a cup of chocolate chips.  I may have also added a teaspoon or so of vanilla.

4. Problems:  It was a little over sweet right after I made it but the sugar-y flavor seemed to have mellowed after a little bit in the fridge.  Other than that it mixed up exactly as expected.

5.  Overall Impression: Frosting is very thick so it doesn't make a super pretty cupcake.  I can't even begin to imagine piping this.  However this is probably one of the more accurate egg-less cookie dough I've made.  Very very good!

6. Quantity: As usual I got 20 cupcakes out of a cake mix based batter.  Only had enough frosting to really ice 18 cupcakes.

I'm doing a round 2 of last year's 52 weeks of cupcakes.  I love cupcakes and the options that come with them in cake combinations, fillings and frostings.  Also I've been watching Food Network's Cupcake Wars on Amazon Prime and it's made me miss experimenting with cupcakes.  So I have 2 goals for this project.

1. Make a different cupcake every week for 52 weeks.
2.  Try recipes off my Cupcake Pinterest Board that have intrigued me but have never been made.

So the first week cupcake is: Chocolate Banana Cupcakes 1. Source:  Hip Foodie Mom - a blog that I've never used before but definitely will again.  This is a recipe she got from one of the Hummingbird Bakery cookbooks which is on my list of books to buy.

2. Ease of Recipe (1 being cake mix/canned icing - 5 tons of steps and very time consuming):  Probably a 2.5 or a 3.  The cake went together very easily but the icing was a little trickier though still not difficult.

3. Changes Made: Only difference was I used heavy cream instead of milk in the frosting.  Used Hershey's Special Dark cocoa instead of regular.

4. Problems: The only problem was the frosting was very stiff and I ended up having to use an extra tablespoon or so of cream.  This could have been because the cream was thicker than the milk would have been but I've made this substitution before and not had this problem.  Also the cake was a little crumbly when still a touch warm.  Definitely will have to let them cool completely next time to avoid broken edges.

5.  Overall Impression: The cake is wonderful - not too dense but very moist.  The smell of it cooking made my mouth water.  I was worried the ginger would be overwhelming but it definitely wasn't.  The icing was very good.  The frosting was nice and fudge-y.  A good compliment of flavors.

7. Make Again?:  Yes definitely though only if I had people to share them with as not everyone here would eat them.
Posted by Katherine P at 6:59 PM No comments: