I almost didn't make this recipe because originally it makes 28.  The Tornado and I are the only ones who like Nutella and the idea of the 2 of us trying to eat 28 cupcakes didn't seem like the way to go.  Luckily this recipe is easy to half so these got made today.  Forgive the quality of the photo.  I was tired and redoing it just wasn't going to happen.  Also the bunny at the very side of the picture isn't angry but actually sneezing.  In real life it's cute not as creepy as the picture makes it look. 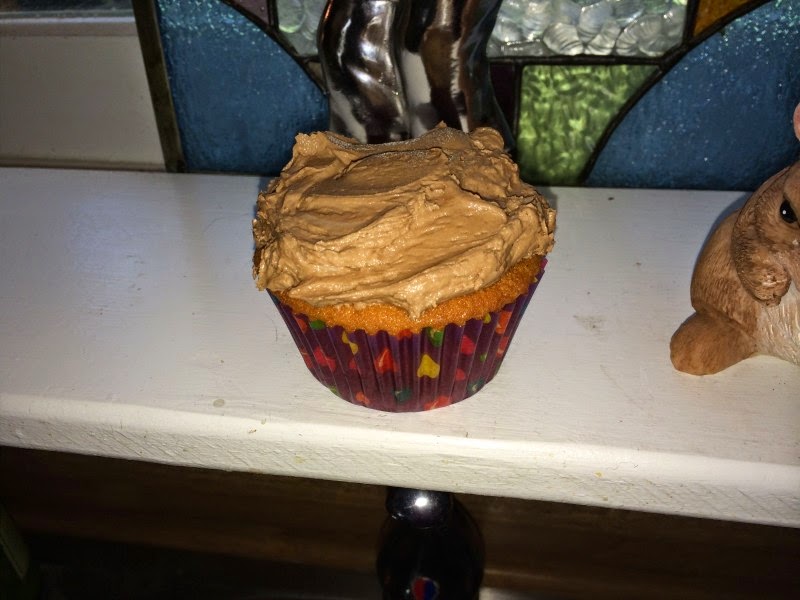 1. Source: Krissy's Creations
2. Ease of Recipe (1 being cake mix/canned icing - 5 tons of steps and very time consuming): 2.  The directions for making the cake are a little different than the method I normally use but it's not anymore difficult and comes together really well.

3. Changes Made:  When I was already in the middle of making this I discovered the buttermilk in the refrigerator was actually more like butter.  To make up for it I used 2 tablespoons sour cream to 1/2 cup skim milk which gave it the right tang and texture.  I also halved the recipe but that's mostly simple math.

4. Problems:  I ended up needing about 5 minutes less cooking time than she called for.  My oven tends to run hot so that's not too big of a surprise.

5.  Overall Impression:  The cake is really lovely - light and fluffy with the tang and vanilla butteriness of a pound cake.  I have mixed feelings about the frosting though.  It's light and fluffy but the combination of confectioner's sugar as well as the Nutella makes a bit too sweet for me.

7. Make Again?: The cake yes - the frosting probably not.
Posted by Katherine P at 4:57 PM

Email ThisBlogThis!Share to TwitterShare to FacebookShare to Pinterest
Labels: cupcakes